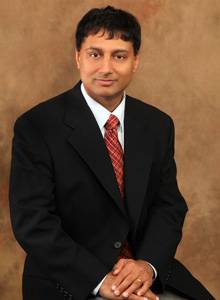 Dr. Hiten Prajapati is a native North Carolinian. He completed his undergraduate studies at the University of North Carolina at Chapel Hill where he received his Bachelor of Science in Chemistry in 1997. From there he took two years to reflect on life and began working with patients in eye care as an Optometric technician. This is when his passion for eye care and helping people see better blossomed. From there, Dr. Prajapati attended Illinois College of Optometry (ICO) where he earned his Doctorate of Optometry in 2003. After graduating from ICO, Dr. Prajapati successfully completed a residency in Ocular Diseases at the Huntington VA Medical Center in Huntington, West Virginia.

Since he has always called North Carolina home, Dr. Prajapati started his career in Raleigh where he was appointed as Clinical Director of TLC Laser Eye Centers. There he gained immense dry eye and corneal refractive surgery experience. He has lectured numerous times on dry eyes and systemic effects that lead to dry eyes.  Dr. Prajapati has professional and civic affiliations with the American Optometric Association, the North Carolina Optometric Society and the Morrisville Chamber of Commerce.

People often ask Dr. Prajapati, “How are you so caring and diligent with all your patients”? He simply answers, “because I treat my patients as if they are part of my own family”.  Dr. Prajapati lives in Cary with his beautiful wife and two precious kids. In his spare time he loves to travel with his family, get involved with the surrounding community and watch sports.